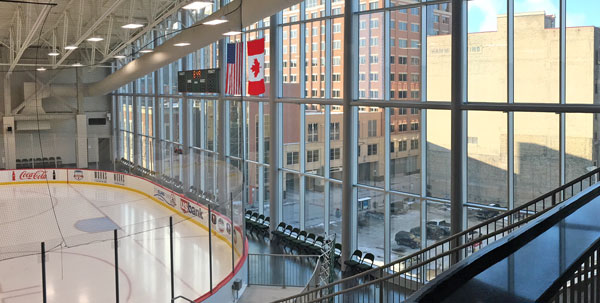 SageGlass®, manufacturer of the world’s smartest electrochromic glass, has completed a dynamic glass installation on the west façade of TRIA Rink, the new official practice facility of the National Hockey League’s Minnesota Wild. TRIA Rink is on the fifth floor of Treasure Island Center, a former Macy’s department store at 6th and Wabasha streets in downtown Saint Paul. The Saint Paul Port Authority is redeveloping the building into an office and retail hub in partnership with Hempel Companies.

TRIA Rink, constructed on the rooftop of the existing building and designed by Minnesota-based Collaborative Design Group, utilizes SageGlass to open up the facility to views of downtown Saint Paul. Crucially, dynamic SageGlass provides solar control, tinting automatically to prevent glare and overheating. This will protect the professional grade NHL ice rink and curb the building’s cooling load, while occupants benefit from access to daylight.

“The glass exterior SageGlass installed at TRIA Rink is a signature piece of this project, and to our knowledge, a first for a hockey arena,” said Jamie Spencer, Minnesota Wild Executive Vice President of Business Development. “The views of downtown Saint Paul from our new practice facility are incredible and something both the team and the public will enjoy for years to come.”

SageGlass provides all the advantages of glazing while simultaneously enhancing the comfort of the interior environment.

“SageGlass is well positioned to benefit athletic facilities, where comfort and performance are closely linked,” said Alan McLenaghan, CEO of SageGlass. “Using dynamic glass to manage glare and heat at TRIA Rink will improve the experience for athletes, coaches, trainers and onlookers alike.”

TRIA Rink, which features bleacher seating for 1,200 people, will also be available to the public and area youth teams.

“SageGlass has helped elevate the performance of this professional practice facility to the level our Minnesota Wild deserve,” said Lee Krueger, President of the Saint Paul Port Authority. “We are proud to work with a Minnesota manufacturing company to bring this unique project to our city.”

SageGlass provides different levels of tinting to accommodate the varying need for solar control throughout the day, depending on the sky condition and the position of the sun. For example, TRIA Rink facility managers may keep the glass transparent at night, offering an exhilarating recreational experience for local youth teams who use the facility. During the day, they may tint the SageGlass to keep Minnesota Wild players comfortable during practice and free from glare.

This project was completed in partnership with glazing contractor Empirehouse and general contractor RJM Construction.