An appealing alternative to double-skin façades

DOUBLE-SKIN FAÇADES: THE PROS AND CONS

Double-skin façades consist of an exterior and interior wall, both glazed and separated by a cavity ranging from a few centimeters to several meters in size. The cavity allows air to circulate and often incorporates solar protection systems, which are protected from inclement weather. Used by developers since the 1970s, mostly to give buildings a more modern appearance, double-skin façades allow buildings to have a fully glazed exterior while improving thermal and acoustic performance. 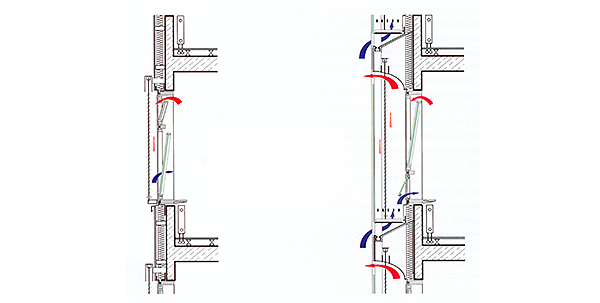 Comparison between a single-skin and double-skin façade (source: The tectonics of the double skin, understanding double façade systems, T. Boake) 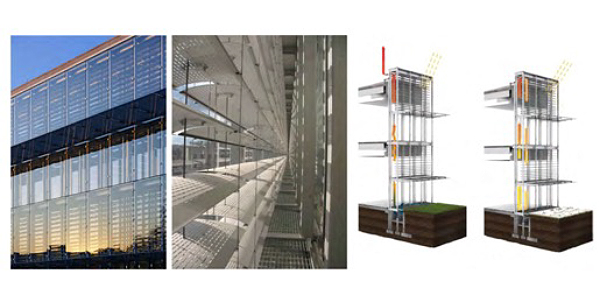 However, double-skin façades require a long and complex installation process. Investment and operation costs are very high.1 To comply with energy regulations, these façades have become thicker and more cumbersome, which makes them trickier to install; living space is also often reduced because of the façade’s thickness.2 Access requirements for maintenance and upkeep often limit options for using the area right next to the façade, further reducing the usable space.

It’s also common for impurities and humidity to collect inside the cavity.3 This can diminish the aesthetic appeal of the façade, impact views from inside, and lead to mold and corrosion. They also worsen thermal and, in some cases, acoustic performance. It’s important to manage the ventilation in the cavity and maintain it regularly; for certain types of double-skin façades, getting access for cleaning and maintenance is tricky—and can be expensive.1

The air cavity can also get too hot.4 Apart from impacting thermal comfort in summer, this can also affect mechanical ventilation systems and the electric motors of blinds. So double-skin façade projects require careful design, taking local weather conditions and building use into account, as well as an appropriate ventilation strategy and carefully selected glazing.5 There are also important safety considerations: fire safety, first and foremost6; the effects of wind7 and the risks of seismic events and falling.

Finally, in terms of comfort, adding a second exterior skin can reduce the quality of natural light entering the building in some circumstances.8 And while sound insulation is one of the intended advantages of a double-skin façade, there can be issues with noise transmission between neighboring rooms and floors if the design is flawed or if openings are not closed.4

While the theoretical benefits of double-skin façades have been highlighted by a number of studies, many also show how hard it is to model these systems properly and predict their performance.9 Currently, there is very little feedback from the field about the real-life performance and efficacy of these façades when the building is occupied. The debate over investing in this type of construction continues.10

Self-conditioning façades are an alternative to traditional ventilated double-skin façades. Invented in France, these façades feature a cavity with a single opening for exterior air to pass through. At the same time, air circulation in the cavity is minimal, and exchange with the outdoor surroundings is limited to water vapor extraction. This helps seal the building to protect against humidity and grime. These façades are thin—70 millimeters on average—which can increase the building’s useful space. Many designers currently offer self-conditioning façades.

With self-conditioning façades, there is still a risk of misting (the biggest risk) and elevated temperatures in the cavity.11 In addition, it’s complex to design, manufacture, and install these façades. These systems are considered non-traditional and require specific study. In France, designs subject to a technical appraisal or ATEx are recommended.

Closed cavity façades (CCFs) were developed several years ago to remedy some of the drawbacks of traditional double-skin façades. They consist of fully closed cavities that are sealed off to exterior air. Dry air injected by a central unit outside the cavity circulates inside. The sealed nature of this system helps prevent the accumulation of dust and humidity in the cavity, boosts the lifespan of the components, and reduces maintenance requirements. The façade is also thinner compared to a traditional double skin.

But these façade systems also pose other challenges.12 Their tightly sealed design means that the interior elements of the cavity are hard to maintain and replace. They also need to withstand elevated temperatures, since the cavity can heat up significantly; that means features like blind motors need to be installed outside the cavity. The sealing requirements also make designing these systems more complex, and the air circulation system must be designed very far in advance. Ultimately, this type of façade has not yet become systematic and must be tested before being used on a site. In France, designs subject to ATEx are required. 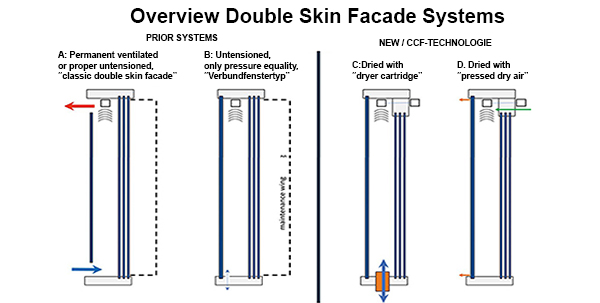 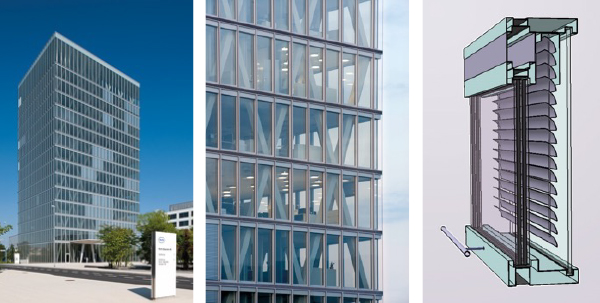 Example of a building fitted with a closed cavity façade (source: https://www.stylepark.com/en/news/energy-saving-ccf-façades)

For ventilated double-skin, self-conditioning, or closed cavity façades, dynamic management of the sunlight and heat must be provided by built-in solar protection, combined with an advanced control system.10 This can increase investment and maintenance costs, and impact occupant comfort. The solar protection systems mentioned here often block natural light and outdoor views—the reasons for windows in the first place, and whose benefits have been shown in many studies.13 They can also be noisy and distracting to operate.

AN APPEALING ALTERNATIVE TO DOUBLE-SKIN FAÇADES

SageGlass smart glazing is an appealing alternative to double-skin façades of any type.

SageGlass is an ideal solution for meeting aesthetic requirements and current criteria for performance, comfort, and usage. 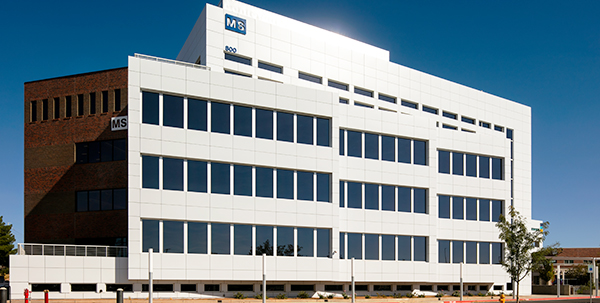 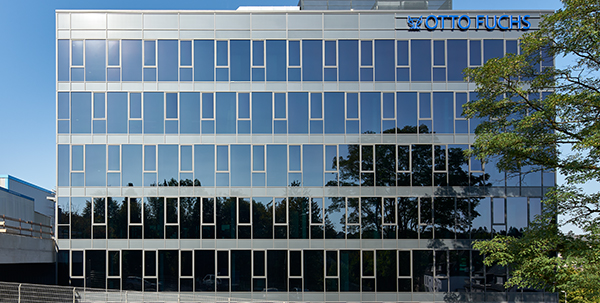 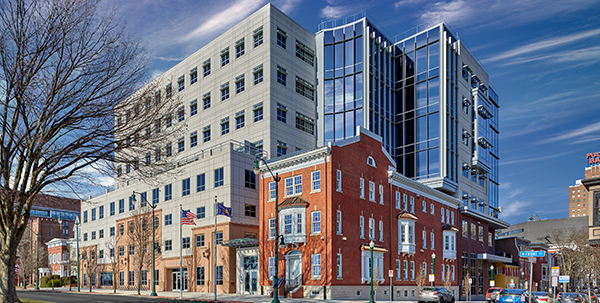 8 Building simulation as an assisting tool in decision making, case study: with or without a double-skin façade? R Høseggen et al, 2008

10 Exploring the advantages and challenges of double-skin façades (DSFs), A. Ghaffarianhoseini et al, 2016

14 Based on energy studies conducted by external market research companies. Contact us for more information.