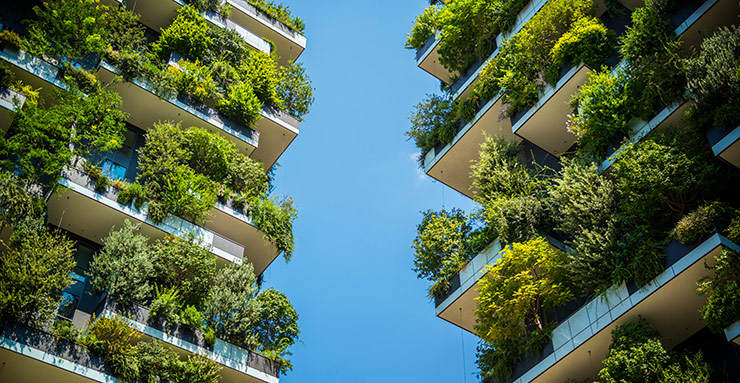 At SageGlass, we often talk about the energy savings our smart window system can provide through intelligent tinting. What we don’t talk about as often is how we can customize this intelligent tinting during building design to help meet sustainable building targets. Here are two examples of how we can tweak the software driving our system to help customers meet Net Zero and Passive House targets.

For those unfamiliar, Passive House is a standard focused on super energy-efficient building design. In general, this means buildings that consume 75% less energy than a comparable building. While many techniques and technologies can be used to meet this target, a very efficient building envelope is basically a given.

In a fairly temperate climate like British Columbia, heating needs are somewhat limited, so glazing is selected considering how “passive heating” can help offset heat generation from mechanical systems. This creates the need for glass with higher solar heat gain. However, summers still get hot in BC, so there’s also a need for glazing that has low solar heat gain. Given that smart glass can do either, it makes a lot of sense for Passive House buildings.

We worked with a customer to simulate how our glass would operate over the course of a year in their building (something we do quite often). Through this process, they learned that a slight change in how the glass would normally operate in the winter would help them get more passive heat to support their Passive House target. So we modified our algorithm. Problem solved. With a simple, no-cost software tweak, we helped the customer achieve Passive House certification.

We worked with a customer pursuing Net Zero for a large, highly glazed building in the hot and humid climate of Raleigh, NC. Similar to the previous story, we provided them with our standard smart glass operation, and it saved quite a bit of energy vs. baseline glazing (17% less). They were happy, and that was that.

Months later, the design and engineering team came back to us and said, “We are just one point of EUI (Energy Use Intensity) away from Net Zero levels but don’t want to spend any more on new measures to get there. Can you help?” We went back to our algorithm and saw an answer. By tinting a bit more on just a few of the hottest days of the year, we would shave off that critical point of EUI. This helped the team get to Net Zero energy with no additional spend.

More Than a Parlor Trick

When I interviewed for a role at SageGlass, one of the interviewers said something that, at the time, struck me as very odd. He said, “Glass that tints is just a parlor trick unless it does so intelligently.” I didn’t really know what he meant at the time, but that statement was sufficiently surprising that I stored it somewhere in my mind.

During my tenure with SageGlass, it resurfaced as I became aware of what the system could truly do. It isn’t just that the glass tints, it’s that it does what customers want it to do. We put glass to work in support of our customers’ goals, whether those goals are comfort, wellness, productivity, or sustainability. Organizations should expect that their buildings help deliver on their mission, and they should expect the same of the glass in those buildings.

Jordan Doria is the Territory Manager for Eastern Canada. Jordan has a decade of experience in the building industry, working to promote buildings that are better for people and the environment. He holds a Bachelor’s and Master’s Degree in Political Science from Villanova University (USA).

DATA ON THE MARKET VALUE OF SMART BUILDINGS