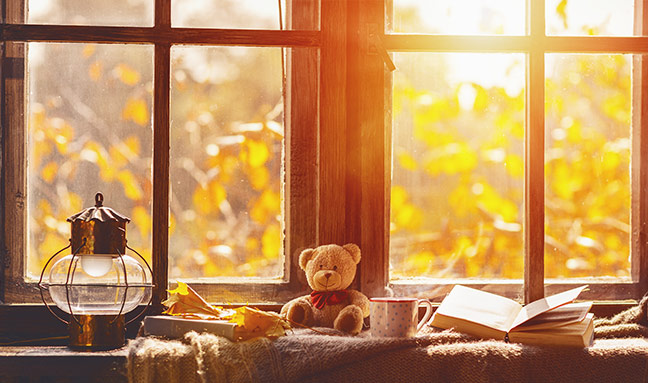 “Windows of all shapes and sizes not only bring light into our lives, but they connect us to the urban or green landscapes beyond,” says radio host Helen Mark. On a recent episode of Mark’s BBC podcast, Open Country, she spoke with people who have direct and unique relationships with windows, through their work, studies, or day-to-day life.

THE POWER OF DAYLIGHT

Mark’s first guest is professor John Mardaljevic, who researches and teaches building daylight modeling at Loughborough University’s School of Architecture, Building and Civil Engineering. “Windows have an impact on our mental health and wellbeing in a number of ways,” says Mardaljevic. “One of the most important is with training the circadian rhythms—that means synchronizing the body clock to the 24-hour cycle of day and night.”

Of course, to understand the power of daylight, we also need to understand the effects of light deprivation. Mardaljevic mentions experiments done in the mid-20th century that involved putting subjects in a completely dark cave or cell and observing what happened. “Within less than a week, their body clocks would be all over the place…The most effective way of re-setting a body clock is to expose the eye to high levels of illumination early in the morning,” says Mardaljevic. (Light entering the eye stimulates part of the hypothalamus, the suprachiasmatic nucleus, which sends signals to other parts of the brain; those parts start waking up the body.)

Some of those controversial mid-century studies Mardaljevic refers to were designed by Canadian psychologist Donald Hebb and French geologist Michel Siffre. Siffre was one of the first scientists to note the existence of the “biological clock.” And Hebb showed how quickly darkness can negatively affect humans. After just hours in darkness and isolation, Hebb’s subjects started reporting vivid, specific hallucinations. He wrote, “It is another [thing] to find, in your own laboratory, that merely taking away the usual sights, sounds, and bodily contacts from a healthy university student for a few days can shake him, right down to the base: can disturb his personal identity.” 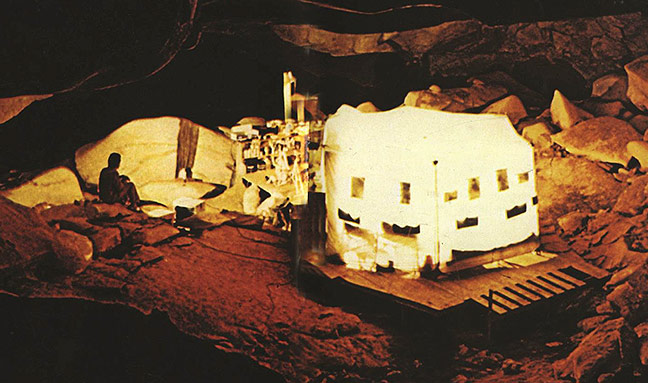 Michel Siffre’s experiments underground helped him to understand the impact of light and darkness on our human natural rhythms. (source: M. Siffre)

SCHOOLS: A CASE STUDY FOR WINDOWS

Despite studies like Hebb’s and Siffre’s, many buildings in the mid-20th century were designed to be thermally efficient and utilitarian. At the time, that usually meant forgoing a lot of windows. Architects and others began to push back on those ideas as the years went by. A 1999 report in California, called Daylighting in Schools, looked at this. Researchers wrote, “Controlling for all other influences, we found that students with the most daylighting in their classrooms progressed 20% faster on math tests and 26% on reading tests in one year than those with the least.” The researchers mentioned a similar 1992 study from Sweden: “The researchers found significant correlation between daylight levels, hormone levels, and student behavior, and concluded that windowless classrooms should be avoided.”

And it’s not just about the light. “The view through the window has value on several levels,” says Mardaljevic. There are three important “layers of view,” he explains. “One is of sky; one is of ground; and the middle layer is of the natural or built environment. It’s believed that if you have all three of those layers, you’re more likely to have an agreeable view.”

One person who helps her clients get the best view is the next guest on the Open Country windows episode: professional window cleaner Amy Owens, from Bridgwater, England. She mentions the natural beauty of her home region and the importance of those views to the people who live there. “Living in this part of the world, we’re really lucky, and Somerset is beautiful. There’s wildlife and birds, and you can sit and have your sandwich with beautiful views of Glastonbury Tor.” 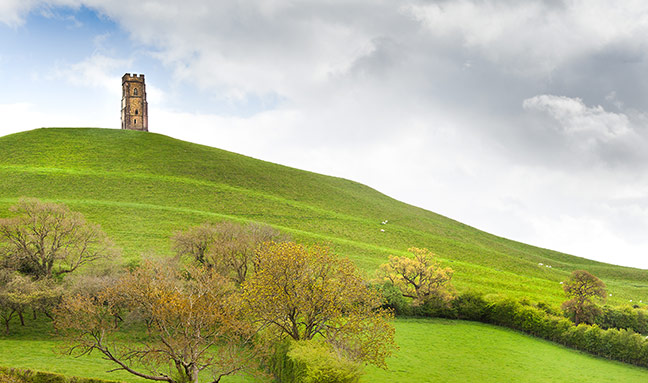 Owens notes that many of her customers are elderly, often spending more time at home than younger folks. At an age when feelings of isolation and loneliness can set in, looking out the window provides a sense of scope and beauty. One of Owens’s clients is retired psychologist Marco Del Aberdi, who also happens to be Helen Mark’s third podcast guest for this episode. “We built this place in 2015,” Del Aberdi says of his home in Somerset. “We ended up with these magnificent windows and this beautiful view. We sort of made the house around this view.”

As a psychologist, Del Aberdi has a unique perspective on the importance of windows. “I think they have a good impact on my mental health,” he says. Del Aberdi describes the wildlife he sees from his large main window, including starlings, peregrine falcons, and other birds. One benefit of making time to look out the window, he says, is noticing daily and seasonal changes. “I’m retired now, so I sit and look out of this window a lot. It’s interesting the way the light plays across the landscape. I’ve spent a lot of time looking out, watching the changing colors, and I paint landscapes.” 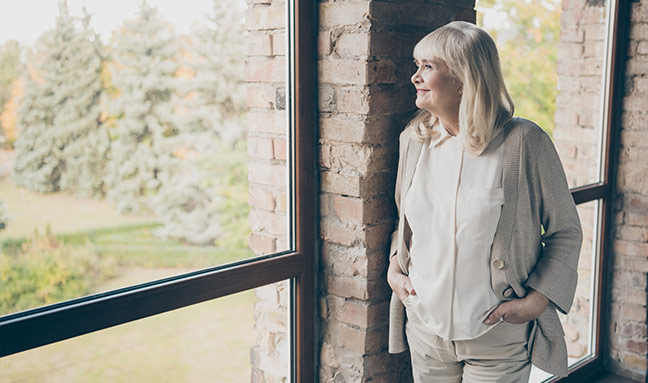 Del Aberdi isn’t the only senior who derives great benefit from his windows. British geographer Graham Rowles has focused some of his research on the “surveillance zone.” “Immediately outside each dwelling is an area that can be viewed from the windows,” Rowles wrote. “This space within the visual field of a residence may be formally defined as the surveillance zone…This zone mediates between the sacred space of home and the more remote community environment.” Rowles found that for the elderly, especially those who were the most housebound, this zone was their primary way of interacting with the outside world. The zone usually offered a practical purpose, too—to watch for the newspaper carrier, to check on the garden, or to keep an eye on the neighborhood children playing.

Charles Musselwhite, an associate professor at the Centre for Innovative Ageing at Swansea University, interviewed housebound seniors in the United Kingdom. Most of them valued their window views so much that they intentionally set up their rooms and furniture to optimize their viewing. “What was most important for my interviewees was change,” wrote Musselwhite. His respondents liked watching the seasons change, and projects like road construction.

WINDOWS AT HOME AND AT WORK

Architects and engineers know that people value windows—indeed, that they can vastly improve quality of life. Modern technology is making windows more accessible to more people, including those in densely populated urban areas. The Dutch firm HofmanDujardin Architects designed a “kinetic” apartment window that transforms into a balcony; it literally expands the square footage of each dwelling, and offers more views and light to residents. In an article for Architzier.com, architect Michiel Hofman said the window is called the Bloomframe because it “opens up” like flower petals. “Our client has the possibility to open the façade in the morning, enjoy the sun, look at the canal and have a cup of coffee,” Hofman said. “It will react according to the mood and the behavior of the user, and it communicates with the people in the public space.”

Windows are important where we work, too. In the Dallas Business Journal, Bridgette Spencer, CEO of Spencer Design Group, said, “Ergonomics and lighting are always major issues” for employers and their employees. “Green spaces and views of the outdoors are important to many people.” She added that, in today’s business market, companies that offer premium office spaces (read, with lots of daylight and views) are positioned to attract and retain top employees. “If Company A has a great space that is attractive and functional, and Company C has only a mediocre environment, who do you think will have the edge in hiring?”

BRINGING THE OUTSIDE IN

Back on the Open Country podcast, John Mardaljevic says that we need to invest in high-performing windows—that let in lots of light and views while minimizing glare and heat—especially in commercial spaces. “The dynamic control of daylight is the holy grail of the fenestration industry,” says Mardaljevic. “One of the candidates for this is…electrochromic glazing, and we’re starting to see that in buildings…I think that could be a game-changer.”

Helen Mark wraps up the episode by turning back to the humble kitchen window. She says, “There’s always movement—wind through leaves, birds through branches. It’s this window above all the others that makes me feel I haven’t lost touch with the pleasure and benefits to be gained from the natural and outside world.”

Jennifer Pitterle is a Minnesota-based writer and editor with a focus on lifestyle journalism and creative nonfiction.

STRESS REDUCTION THEORY: WHY LOOKING AT NATURE IS BENEFICIAL TO OUR MENTAL AND PHYSICAL HEALTH

Psychological and economical value of views

Daylight : a powerful ally for our health