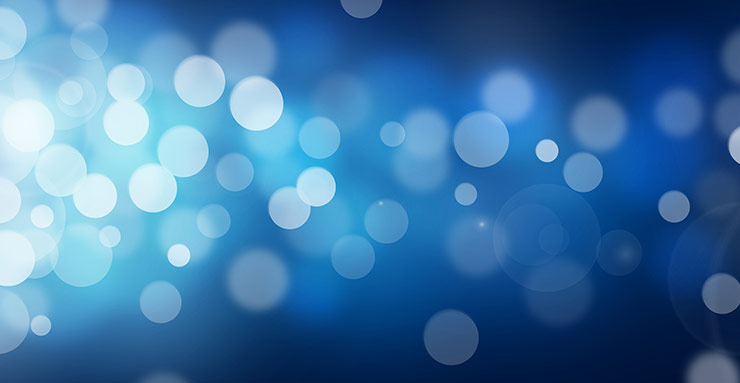 For some time now, we have been seeing an increasing emergence of advertisements, articles and reports warning us of the potential risks of blue light. If we are to believe these sources, blue light is apparently harmful to our eyes, our sleep and indeed our appetite! And if you wear glasses and frequently work on a computer screen like I do, I imagine your ophthalmologist or optician has already prescribed you “blue-light-blocking” lenses! 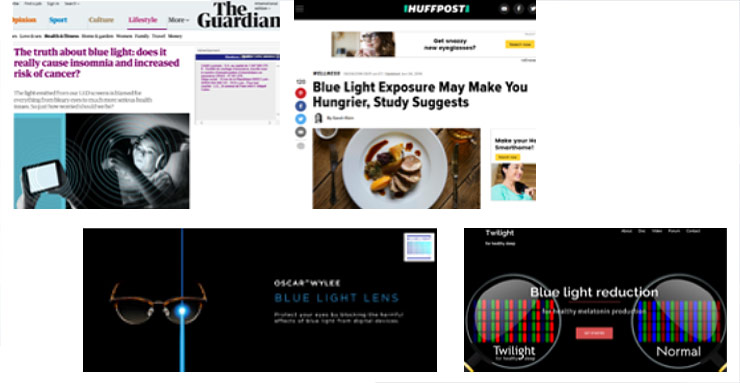 The effects of blue light explored in the media (caption: English/German blog)

But did you know that the sunlight we are exposed to every day itself contains a lot of blue light? And yet this does not seem to have compromised our existence in any way, nor forced us to spend our days and nights in caves. So, what are we supposed to believe? Is blue light really that dangerous? If so, in what conditions? And what blue light are we talking about exactly?

Let’s try and take stock of the scientific findings available to date on this matter.

The photochemical effects of blue light

UV and blue-violet light (380 – 495 nm) are the wavelengths with the highest energy, and are thus potentially the most harmful to the human eye. 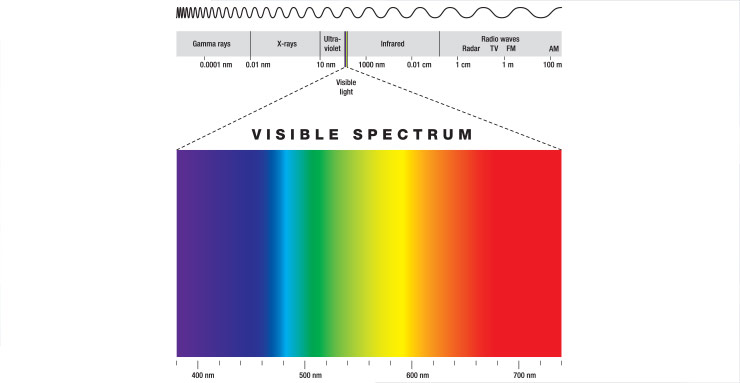 While the harmful effects of UVs, particularly on the skin and eyes (cataracts), have long been known and identified, more recent research combining human observations and experimental studies of cellular cultures and different animal species has shown that, over time, exposure to blue-violet light aggravates certain eye diseases, such as AMD (age-related macular degeneration, which causes permanent blindness)1,2. Researchers from the French National Institute of Health and Medical Research (INSERM) are said to have identified the most critical wavelengths, following experiments conducted on pig retinas: 415 nm and 455 nm, peaking at 430 nm3.

Certain sections of the population are thought to be more sensitive than others. These include children, people with aphakia (no lens in the eye) and pseudoaphakia (artificial lens), and people sensitive to light, such as those suffering from AMD. The risk depends on the cumulative dose (and thus the intensity and duration of exposure) of blue light to which an individual has been exposed. It is believed repeated moderate exposure over long periods of time is enough to pose a risk of retinal damage1.

That being said, the toxicity of blue light has never been thoroughly proven in epidemiological studies on humans, due to the difficulty associated with assessing cumulative exposure and personal predispositions1,4. There is currently still a degree of uncertainty, particularly regarding the intensity and cumulative duration of blue-light exposure deemed responsible for the harmful effects.

As already mentioned in a previous blog, recent research has also elucidated the key role played by light, particularly blue light, in regulating our circadian rhythms and other human biological functions. During the day, it boosts sleep quality, alertness, memory, mood etc. But exposure to blue light at night causes our body clock to shift, resulting in imbalances and problems ranging from insomnia to more serious consequences like diabetes, obesity or cancer5.

How can this blue light have such power? As it so happens, The unpronounceably named ”ipRGC” photoreceptors, mainly responsible for so-called non-visual effects, contain a photopigment, melanopsin, that is most sensitive to blue light (approximately 460 – 480 nm, blue-turquoise)6. This peak in sensitivity has also been found to tie in with that of melatonin7, the so-called “sleep” hormone, which is suppressed during exposure to blue light. In comparison, our visual system’s sensitivity peak (corresponding to cone and rod sensitivity) comes at around green (approximately 550 nm): 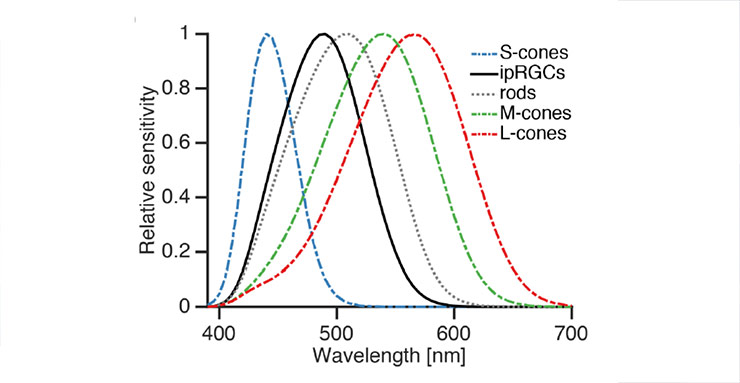 It is nevertheless also important to remember that research in this field is still far from complete, and that future studies still need to be conducted, namely in terms of the exact quantitative values triggering these effects.

A debate in a time of digitisation and LEDs

The issue of exposure to blue light has primarily surfaced following the emergence of LEDs (electroluminescent diodes) on the lighting and electronics market. Known for their very long lifespan, as well as their very low energy consumption, they are increasingly being used in lighting equipment, including those found in Smartphone, tablet and computer screens.
But one key feature of these new lighting sources is that they are strong emitters of blue light (particularly the “cool” LEDs, with a colour temperature of around 6000°C), even though the light they produce looks white. If we examine at their spectrum, this shows a substantial blue-light component (wavelengths between 380 nm and 500 nm) compared to other, more traditional types of light: 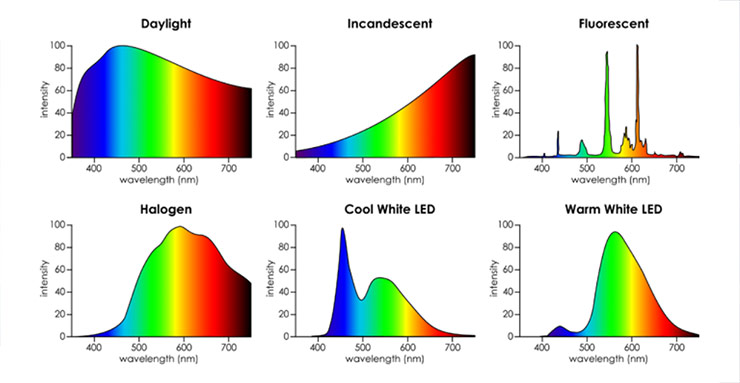 People’s growing exposure to these LEDs has intensified the debate on the effects of blue light. And while the debate may still be ongoing, one thing is for sure: if you have trouble falling asleep, ask yourself if you spend a bit too much of your evenings playing Candy Crush on your Smartphone, checking your emails on your computer8,9, or training for the next edition of Master Chef in a brightly lit kitchen to make sure you’re using the right ingredients…

Unlike other known sources, sunlight contains a high quantity of all colours on the visible spectrum. It emits much higher intensity rays than other sources of artificial lighting, and is also the richest source of blue light, as shown in the previous graph.

So maximum exposure during the day is the most effective means of regulating our body clock and activating our non-visual functions. But on the other hand, doesn’t this expose our eyes to more risks of degeneration? Once again, it’s not so much about whether or not we’re exposed to blue light, but rather the total amount to which we’re exposed during the course of our life. The first way we can limit risks is to avoid looking directly at the sun without any protection when we’re outside. This also applies when we’re inside and a very low sun comes directly into our field of vision.

Blue light is said to have both harmful and beneficial effects on health, and these effects depend on the time, duration and intensity of a person’s exposure to it.

It is also worth noting that the effects on humans differ depending on the type of blue light: Blue-violet light is responsible for the photochemical effects on the retina, while blue-turquoise light affects the body clock.

With regards to the effects on the retina, the scientific studies conducted to date have been unable to reach any specific conclusions on the toxic nature of blue light in relation to the human eye. The amount of radiation is considered the most important factor in determining its impact. Individual variables such as age and genetic predispositions also need to be taken into account. Additional studies are required before any confirmations can be made regarding the effects of cumulative blue-light exposure over the medium and long term. That being said, some recommendations for blue-light exposure have already been established in standards for both the professional public and private individuals. One example of this in France is the standard NF EN 62471, which defines four hazard groups for sources such as LEDs following a maximum permitted duration of exposure by the eye10. New glasses lenses enabling part of the blue light to be filtered are now also available on the market. They are aimed not only at people suffering from AMD, but also at any healthy individual wanting to prevent any potential blue-light effects.

On the other hand, the effects of blue light on our circadian rhythms and sleep are now known, and recommendations are starting to appear. The International Commission on Illumination (CIE) recently published several technical documents on the non-visual effects of light in a bid to elucidate the state of current knowledge and findings in this field11,12. Standardisation committee ISO/TC 274 is similarly already working to incorporate these effects into future international standards. In the meantime, here is a simple recommendation to help you feel better during the day and limit the risk of insomnia at night: Get as much sunlight as you can during the day, give preference to “warm” lighting (colour temperature around 2700°C) at home in the evening, and say goodbye to your screens after dark. And if you really cannot totally unplug, applications like f.lux, Nightshift (iOs) and Twilight (Android) may be of assistance... 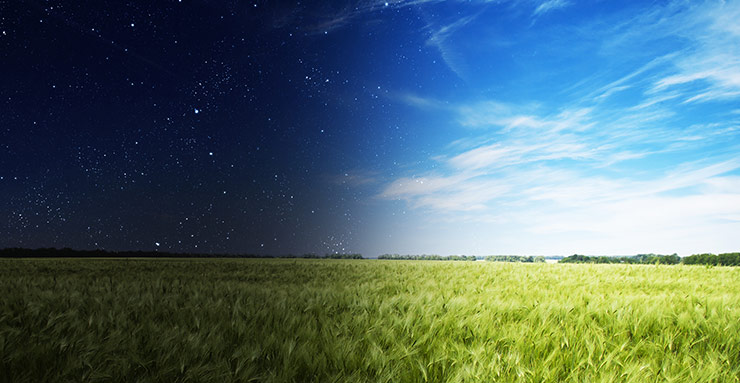 To optimise your sleep and wellbeing, give preference to sunlight during the day and darkness at night

12 CIE TN 003 :2015 Report on the First International Workshop on Circadian and Neurophysiological Photometry

Daylight a Powerful ally to our health

The hidden benefits of natural light