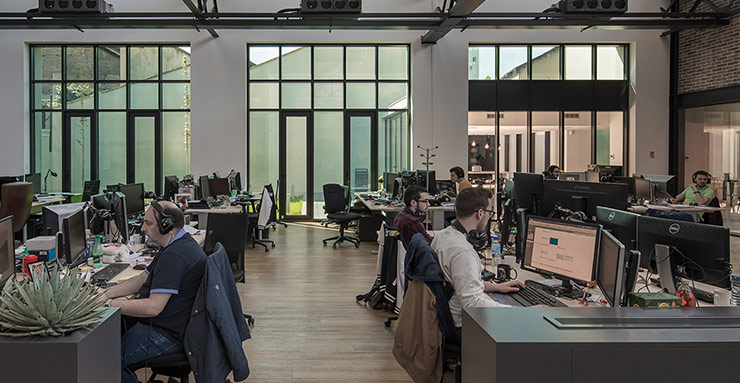 Ubisoft is a French video game company best known for popular games like Rayman, Prince of Persia, Assassin’s Creed and Just Dance (of which I’m a particular fan!). So what are the secrets of the company’s global success? The answer lies first and foremost in the dedicated, creative and passionate employees, who give their all to create the greatest video games of tomorrow.

Their working environment plays an essential role. It needs to be comfortable and suitable for a range of different tasks, while also reflecting the culture and values of the company. This is a vision that Ubisoft shares with many companies today. I had the chance to take a look behind the scenes at one of its studios, Ivory Tower in Villeurbanne near Lyon, France. Since 2017, the studio has been located in a former warehouse, which was renovated and equipped with dynamic glass.

In May 2018, a few of my colleagues and I were invited to visit the studio to collect initial feedback on the occupants’ satisfaction with their new premises equipped with smart glass. I think this approach is essential when adopting new technologies and services that focus on human comfort in buildings.

We began our visit by looking around the workspaces, which were occupied by around 150 employees. I was immediately impressed by the vast expanse of the open-plan office, as well as the contrast of the relatively calm but dynamic atmosphere in the space. This impression was in large part due to the natural light coming from the many windows in the roof and the facade, as well as the controlled acoustics. The employees seemed happy and relaxed. Some were working in their own bubble, with their headphones on, focusing on multiple screens — two or three per station. Others were chatting among themselves.

After a tour of the premises, we talked to a small panel of individuals, whose feedback was very positive overall. Some of them told us they would like the automatic tint of the glazing to be improved to better anticipate the risk of glare. Our technical team was quickly able to help with this request by making some adjustments to the glass control system. 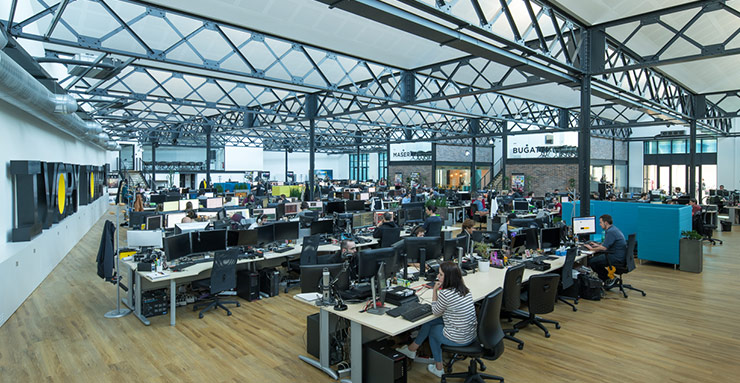 Feedback on a larger scale

A year later, we conducted an online survey of all employees at the studio to collect more comments and opinions, and to find out whether satisfaction among occupants was still strong. Our methodology was similar to that used in previous studies, such as the comfort study conducted at the Glatt Innovation Center in Germany.

In total, 96 employees responded to the survey, and the results were ultimately in line with the feedback we received during our first visit. The following findings were among the most significant:

In their previous offices, Ubisoft employees spent all day in the dark, cut off from the outside world. The blinds were lowered as soon as the first ray of sunlight entered the room and were left that way until the next day — if some kind soul happened to raise them when they arrived in the morning. If you have a preconceived image of a programmer (and there are plenty of them at Ubisoft) preferring to sit coding in a dark room, then our study shows that’s not the case, at least during the daytime!

The study’s findings do show that two-thirds of respondents prefer working conditions with lower light. However, respondents shared a desire for access to natural light, provided that a solution is available to prevent glare on their screens. Ubisoft selected an innovative technology to meet this need, equipping its new offices with dynamic glazing to reduce the risk of overheating and maintain a visual link to the outside world.

Disruptive technologies are not adopted overnight: follow-up and support are needed over time, and this is a process we are committed to following when we implement our projects. Our comfort study, which was conducted three years after employees moved into their new offices, confirms that the dynamic glass meets the expectations of the majority of occupants. All of the findings were shared and discussed with the building operations manager, who was satisfied with the feedback and confirmed our conclusions.