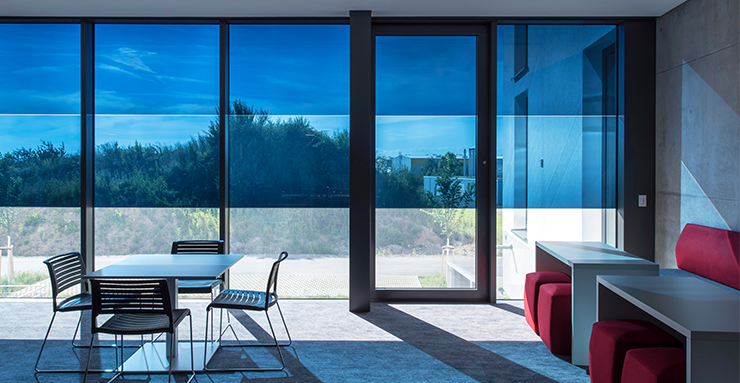 Last year, we conducted a comfort study at the Glatt Innovation Centre offices in Binzen, Germany, with the aim of gathering occupants’ experiences of dynamic glazing and their workspace. The main findings are described in the post below.

Why a comfort study?

In one of my very first blog posts, I described the importance of drawing on sociology in designing buildings which are comfortable for their occupants. Although promoted by recent labels such as WELL or Osmoz, this approach is not in widespread use today.  Yet using surveys or questionnaires to interview occupants of a space allows you to establish whether their expectations in terms of comfort, usage and so on have been satisfied, make them aware of the building’s impact on their health and well-being, and identify potential paths to improvement. It's an approach that I firmly believe in. In my opinion, it is one of the keys to ensuring that technological innovations in building, such as dynamic glazing, are widely used and accepted.

The designers of the Glatt Innovation Centre aimed to achieve the best possible energy performance while improving occupants’ comfort at work, thanks in particular to a permanent view of the outdoors. Was this aim achieved, and to what extent did the dynamic glazing contribute to this? We developed a comfort survey to answer these questions, based on existing surveys from scientific literature in the field, as well as the expertise of our sociologists at Saint-Gobain. The parameters evaluated included visual and thermal comfort as well as general well-being and perceived productivity. The survey was sent to all team members affected, over a period of four weeks.

The following findings were among the most striking: 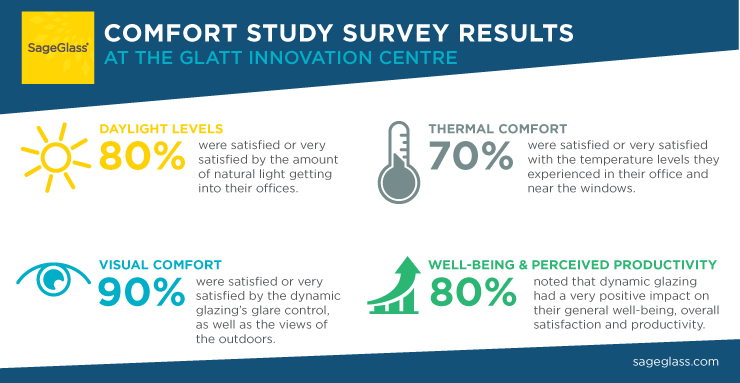 The study's findings confirmed that dynamic glazing had a beneficial impact for the vast majority of occupants in terms of managing light and heat levels, thus improving their visual and thermal comfort. Optimization paths were also identified, such as improvements to the automatic glass control, to respond even more specifically to occupants’ needs which, as you might expect, can differ greatly from one person to another. Furthermore, some of the opinions gathered revealed potential levers for improving other aspects of comfort, such as the quality of air and acoustics. All of the study's findings were shared and discussed with the building’s owner, who was very satisfied with the feedback on occupant experience.

As well as the survey conducted in the Glatt offices, similar studies have been performed in other buildings fitted with dynamic glazing. This was the case, for example, for Saint-Gobain’s new headquarters in the U.S., and other buildings in Europe which will be covered in upcoming posts. Once again, in my view, it would be worthwhile to conduct these studies across the board in the entire construction industry, in order to learn as much as possible and design buildings which suit their occupants even better.

Sociology in the service of architecture, or how to design comfortable buildings