SageGlass®, the pioneer of the world’s smartest electrochromic glass, announced three completed commercial office installations in Nebraska, Iowa and California. SageGlass, a product of Saint-Gobain, was chosen for its ability to control sunlight to optimize daylight, outdoor views and comfort while preventing glare, fading and overheating to create a productive and comfortable work environment.

SageGlass dynamic glass was installed on the curtain wall of the office of Advent, an Omaha, Neb.-based law firm, to solve heat gain and glare. By proactively combating solar gain and glare, SageGlass will not only enhance the comfort and productivity of the firm’s workspace, but will also allow Advent to lease part of the 47,000-square-foot building to other tenants.  The architect Purdy & Slack Associates chose SageGlass for its design flexibility since the dynamic glass is capable of being adjusted to meet future high-end modern layouts. A study at the University of Oregon found that 10 percent of employee absences could be attributed to architectural elements that did not connect with nature. By installing SageGlass dynamic glass, Advent will allow its employees to maintain their connection to the outdoors and will create a healthy and productive environment for them.

A curtain wall of SageGlass dynamic glass was installed on the North pavilion and Southeast conference room of Sukup Manufacturing’s corporate headquarters in Sheffield, Iowa. The family-owned business, which has grown significantly over the last 12 years, wanted to invest in a new corporate headquarters featuring large expanses of glass. The project architect, Bergland + Cram Architects, chose SageGlass dynamic glass for its ability to provide unobstructed views of the outdoors as well as reduce solar heat gain and glare.

SageGlass was also installed at the offices of Landry Design Group, an award-winning architecture design studio based in Los Angeles, to solve issues with west-facing glare. The building, which was originally an animal hospital, was renovated into a high-end office space tailored to meet the firm’s needs for cutting-edge design as well as maximum functionality.  Landry Design Group chose to install SageGlass dynamic glass for its ability to prevent heat gain and glare as well as connect employees to the natural environment to experience the biophilic impact of nature, including stress reduction and increased clarity of thought. 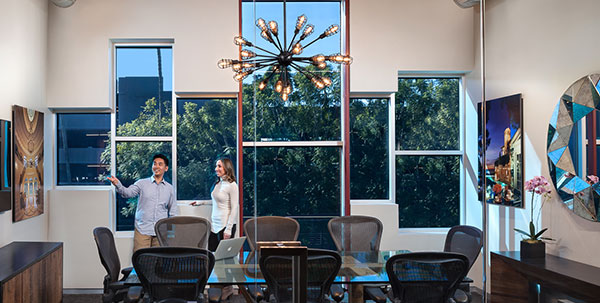 SageGlass® is the pioneer of the world’s smartest electrochromic glass and is transforming the indoor experience for people by connecting the built and natural environments. Electronically tintable SageGlass, a product of Saint-Gobain, dynamically optimizes daylight and manages temperature – all while maintaining unobstructed views of the outdoors. With SageGlass, building occupants can comfortably experience the biophilic benefits of the outdoors, including stress reduction, enhanced creativity and an improved sense of well-being. Unlike conventional sun controls such as mechanical window shades or blinds, SageGlass allows architects to elegantly solve solar control challenges without sacrificing aesthetics and design. As a wholly owned subsidiary of Saint-Gobain, SageGlass is backed by 350 years of building science expertise that only the world leader in sustainable environments can provide. Ready to look again? Visit www.SageGlass.com, @Sage_Glass and Facebook.com/SageGlass.

Saint-Gobain, the world leader in sustainable environments, has designed and manufactured high-performance building materials that improve the lives of people all over the world. From the Hall of Mirrors at Versailles and the glass pyramid at the Louvre, to The Statue of Liberty and The World Trade Center, and even components that allow the Mars Rover Curiosity to seek out life on another planet, Saint-Gobain has been a part of the fabric of human history, advancement and improvement.