SageGlass dynamic glass was chosen for its ability to prevent heat gain and glare to create a comfortable work environment for all employees.

SageGlass®, the world’s smartest electrochromic glass, was installed at the National Institute of Industrial Technology (INPI) in Courbevoie, France. Designed to provide employees with optimal working conditions, the office will feature approximately 15,000 square feet of SageGlass, a product of Saint-Gobain, on the façade of the building.

SageGlass dynamic glass was chosen for its ability to optimize daylight, outdoor views and comfort while preventing glare, fading and overheating to create an environment conducive to the success and productivity of the office’s 550 employees.

SageGlass was also chosen for its ability to reduce energy demand and the need for HVAC by allowing sunlight in on cool days and blocking it on hot days. The installation was well aligned with INPI’s dual corporate social responsibility approach to care for the environment while enhancing employee comfort. As a result of the SageGlass installation, employees are now able to adjust the tint of the windows in conference rooms for presentations as well as enjoy unobstructed views of the outdoors without the glare on laptop screens.

“We are pleased to see our dynamic glass installations grow in international markets as architects and building designers truly take SageGlass’ value proposition to heart,” said Alan McLenaghan, CEO of SageGlass. “We are looking forward to an increasing number of installations in the commercial office sector due to SageGlass’ ability to create a more productive and less stressful work environment while simultaneously enhancing overall building operating efficiency.”

The SageGlass dynamic glass installation at INPI serves as an example of SageGlass’ growth in overseas markets, including Europe and the Middle East. INPI is one of the first buildings in France to feature SageGlass. 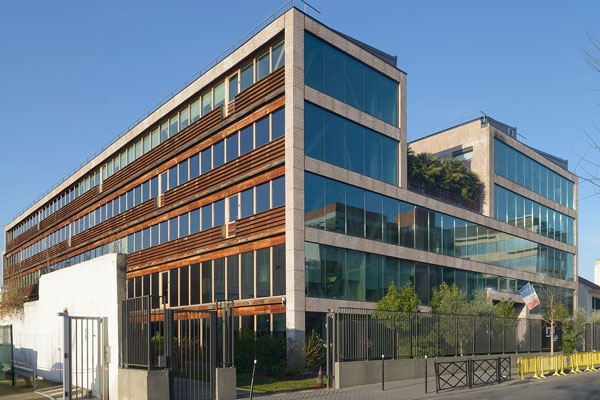 SageGlass® is the pioneer of the world’s smartest electrochromic glass and is transforming the indoor experience for people by connecting the built and natural environments. Electronically tintable SageGlass, a product of Saint-Gobain, dynamically optimizes daylight and manages temperature – all while maintaining unobstructed views of the outdoors. With SageGlass, building occupants can comfortably experience the biophilic benefits of the outdoors, including stress reduction, enhanced creativity and an improved sense of well-being. Unlike conventional sun controls such as mechanical window shades or blinds, SageGlass allows architects to elegantly solve solar control challenges without sacrificing aesthetics and design. As a wholly owned subsidiary of Saint-Gobain, SageGlass is backed by 350 years of building science expertise that only the world leader in sustainable environments can provide. Ready to look again? Visit www.SageGlass.com, @Sage_Glass and Facebook.com/SageGlass.

Saint-Gobain, the world leader in sustainable environments, has designed and manufactured high-performance building materials that improve the lives of people all over the world. From the Hall of Mirrors at Versailles and the glass pyramid at the Louvre, to The Statue of Liberty and The World Trade Center, and even components that allow the Mars Rover Curiosity to seek out life on another planet, Saint-Gobain has been a part of the fabric of human history, advancement and improvement.

In 2015, Saint-Gobain is celebrating its 350th anniversary, 350 reasons to believe in the future. Backed by its experience and its capacity to continuously innovate, Saint-Gobain, the world leader in the habitat and construction market, designs, manufactures and distributes high-performance building materials providing innovative solutions to the challenges of growth, energy efficiency and environmental protection. With 2014 sales of €41 billion, Saint-Gobain operates in 66 countries and has over 180,000 employees. For more information about Saint-Gobain, visit www.saint-gobain.com and the Twitter account @saintgobain or download the “Saint-Gobain Shareholder” application for tablet and smartphone.