It’s a Good Time to be Part of SageGlass

The world was a very different place in 1918.

I recently spoke with a senior operator here, at SageGlass, and he shared a story with me about his great uncle who was one of the first Americans to volunteer for World War I.  His great uncle was sent to France at the start of the war and was there for one to two months before he was killed inaction; however, France refused to send his body back until 1921, at which point they finally agreed with the strict instructions for nobody to open the casket for any reason.  Because of this odd instruction, and presumably his missing body, there is a theory that this man may be one of America’s great “Unknown Soldiers.”

The world was such a big place back then, but not anymore. 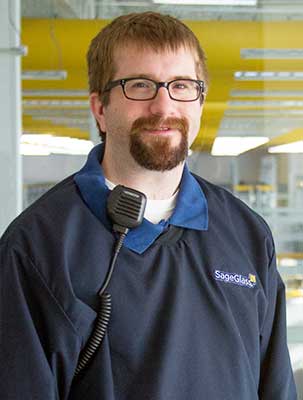 Today, I work at SageGlass, the pioneer of the world’s smartest electrochromic glass. On any given day, ideas are shared between Europeans, Central Asians, South East Asians, Africans, Americans, Australians – and that’s just at the office!  When you add email communications, our reach is even grander in scale.

Working in the Quality Department at SageGlass, I never know what sort of day I am going to have. Will I be able to catch up on my list of projects?  Will we have a new specification that needs to be tested or put out on the production floor?  Or, will I need to investigate an irregularity?

I love my job. I always need to be ready for anything, and I always need to be willing to change direction at a moment’s notice.  I’m a lot like Batman – I identify and investigate potential issues with our processes or products, and then I catch the “bad guy,” or, in this case, the cause of the irregularity.

My job allows me to interact with a wide variety of people, from blue collar to white collar, from operators to engineers.  I represent Quality, and, by principle, it’s everyone’s job at SageGlass to maintain their department’s quality, both in their work and in their workmanship.  Every department already wants a high level of quality, and it’s my job to help them achieve these goals, and to hold them accountable to their own standards.

Working with such a wide range of people from different countries and walks of life leads me to the issue of perspective – How do you see the world?  What do you value?  Everything you know, believe, see, hear and feel is communicated through your perspective.  I’d like to encourage you to slow down, and take some time to remember who you are, where you’ve come from – some of your dreams, passions and hopes.

We must make every effort to never forget where we came from, where we used to be, and what state of achievement we were in last year, even ten years ago. Maybe you, like me, came from an R&D factory that had a great idea but needed some extra financing to give the engineers and scientists more time to experiment while they came up with a brilliant product like our dynamic glass?

The Secret to Success

This leads me to the secret of success – whether you’re working at the corner store or for a Fortune 500 company, the secret to success is forbearance (forbearance could be translated simply as ‘patience,’ but it’s so much more, including self-control, restraint, fortitude, and tolerance). Forbearance with each other; forbearance with your kids; even forbearance towards the driver that cut you off in traffic; but, ultimately, forbearance with yourself so that you can become the person you have always wanted to be.

As Thomas Edison noted regarding his thousands of patents, “I have not failed.  I’ve just found 10,000 ways that don’t work.”

We need to take this mentality to heart and continue to pursue our goals and innovate without boundaries, which I am able to do every day, both in my personal life and at SageGlass.