Going above, seeing beyond: SageGlass at 71Above 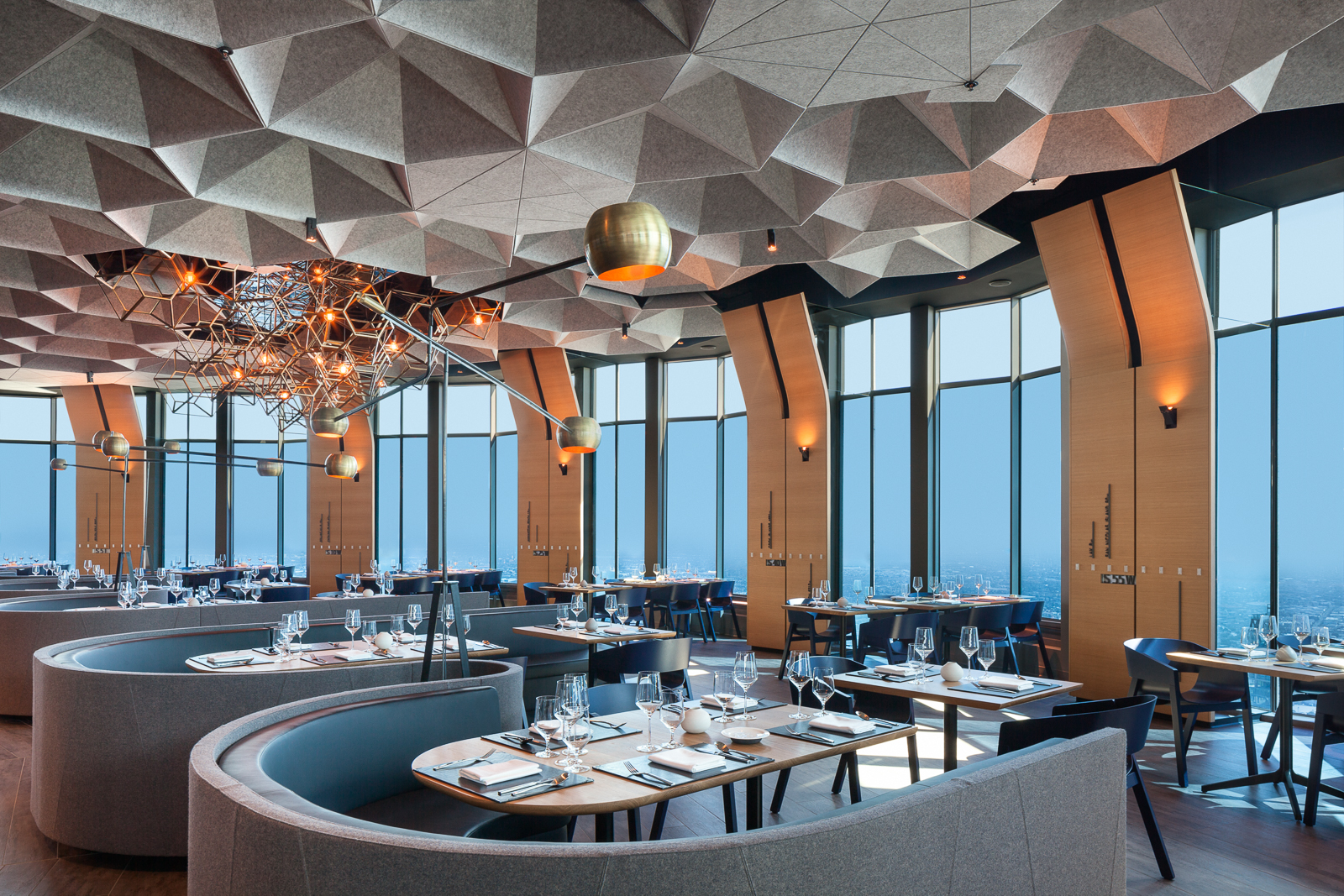 At 1,000 feet above the ground with beautiful views of the city below, 71Above is a new premier restaurant in downtown Los Angeles. Renowned restauranteur Emil Eyvazoff and his design team at Tag Front had a vision to create a high-end restaurant on the 71st floor of the iconic U.S. Bank Tower that would provide diners with 360-degree unobstructed views of Long Beach Harbor and the mountains. However, bringing this vision to life required more than just a top chef, great staff and trendy interior – it required SageGlass.

When the architects surveyed the space, they realized that solar control would present a major challenge to their design plans. The team wanted to design the circular, casually chic restaurant space so that views of the city would be easily accessible, day or night. However, the height of the restaurant, as well as Los Angeles’ blistering summer temperatures, posed their own set of challenges. Eyvazoff and the design team needed to explore solutions that would reduce heat gain and glare without compromising views of the city.

After considering traditional options such as blinds, shades and louvers to reduce heat gain and glare, the team quickly realized these options would not meet the restaurant’s design goals. Conventional solar controls would obstruct the views of the city, which was one of the reasons Eyvazoff was attracted to the U.S. Bank Tower space, and create additional maintenance requirements for 71Above staff due to their possible breakage and rapid accumulation of dust.

After weighing the solar control options, SageGlass dynamic glass was selected for its ability to optimize daylight, outdoor views and comfort while preventing glare, fading and overheating. Notably, SageGlass would be able to provide diners with a connection to the outdoors and beautiful cityscape views, as well as serve as an overall wow factor for the restaurant. By serving as a connector between the built and natural environment, SageGlass allowed Eyvazoff and Tag Front to fully realize their vision without having to compensate aesthetics for solar control; it provided the ideal combination of form and function.

SageGlass partnered with the experts at Giroux Glass, Inc., an expert in innovative glass technologies, to install approximately 3,000-square-feet of dynamic glass on the façade of the restaurant. The dynamic glass square footage included a total of 192 insulating glass units and 48 table-side vents. These vents can be opened by diners to bring in a rush of fresh air and the sounds of the city from far below, allowing diners to feel engrossed in city-life while simultaneously maintaining a bird’s eye view of the city to create a fresh dining experience.

In addition, by controlling sunlight and managing heat gain and glare, SageGlass ensures diners do not become overheated despite the harsh rays of the California sun. The electrochromic glass’ manual override system can also be utilized to alter the ambiance of the restaurant so diners can always enjoy beautiful views of the city, especially during special events such as weddings or business parties.

SageGlass is also very much aligned with California’s green building and sustainability initiatives to reduce the state’s environmental footprint through energy-efficient building design and construction. The dynamic glass installation at 71Above will dramatically reduce energy demand and the need for HVAC due to SageGlass’ ability to let in natural light and provide beautiful views while reducing reliance on overhead electrical systems.

71Above celebrated its grand opening in July and has already been met with positive reviews. The restaurant was nominated for L.A. Weekly’s Best New Restaurant Award and won the top place in Thrillist’s “Best New Restaurants” list. Diners are flocking to the restaurant for the unique dining experience – to sit, perched above the city, enjoying a perspective like no other, which would not have been possible without SageGlass dynamic glass.