The Luminary, projected to be the tallest building in Dallas' West End neighborhood, will use dynamic SageGlass to improve daylighting and sustainability.

SageGlass®, manufacturer of the world’s smartest electrochromic glass, will install 25,000 square feet of SageGlass LightZone® at The Luminary in Dallas, a new 100,000-square-foot office space designed adjacent to project architect Corgan’s headquarters. Upon completion, the office space is projected to be the tallest building in the city’s Historic West End. SageGlass will dynamically control sunlight to create a comfortable and productive work environment with unobstructed views.

SageGlass was chosen for this project to optimize daylight, outdoor views and comfort while preventing glare, fading and heating. According to researchers at the Interdepartmental Neuroscience program at Northwestern University, access to natural daylight is directly related to employee quality of life and improved workplace performance. By maintaining access to daylight, SageGlass helps combat the main causes of deficient workplace productivity including absenteeism, loss of focus and negative mood.

“Our goal is to develop a best-in-class workspace that will serve as a key landmark in the West End Historic District,” said James Adams, Senior Associate at Corgan. “SageGlass’ high-tech solar control solution is well aligned with the innovative spirit of the neighborhood and will help create a dynamic environment that attracts top talent.”

The 100,000-square-foot office space will be a welcome addition to the western edge of downtown Dallas, which has become an innovation district that is home to companies including Uber, Snapchat and Blue Cross Blue Shield. The Luminary will feature a contemporary lounge, a rooftop observation platform and close proximity to apartments, restaurants and attractions, including the developing Victory Park entertainment complex and the convention center.

“As dynamic glass continues to grow in popularity, we are pleased to see SageGlass chosen for state-of-the-art projects like The Luminary,” said Alan McLenaghan, CEO of SageGlass. “We understand the positive impact access to daylight and outdoor views can have in the workplace and believe our dynamic glass will help create a more productive environment as well as transform this building into one of the region’s architectural highlights.”

The project is expected to be completed in 2019 and is seeking to achieve the United States Green Building Council’s LEED v4 Silver certification. Corgan will pursue WELL Building Certification for its new expanded space. 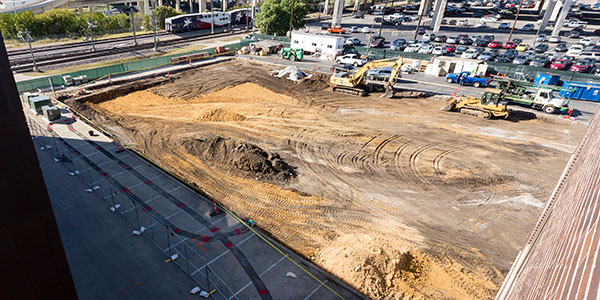